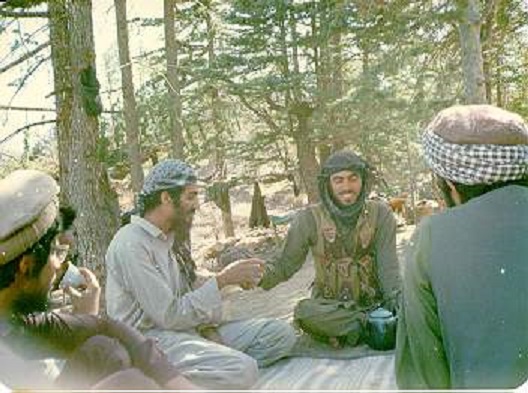 Since it rebranded itself the Islamic State and declared it has established a caliphate on territories the group has seized control of in Iraq and Syria, DA’ISH has been competing with al-Qa’ida, its former parent organization, for control of the Global Jihad movement. Much of this competition to win over the hearts and minds of jihadis the world over has been borne out in these groups’ public communications. For instance, DA’ISH has been issuing claims that Ayman al-Zawahiri has steered al-Qa’ida off the path of jihad charted by the “martyr” Usama bin Laden, whose vision DA’ISH claims to be shepherding today. Meanwhile, al-Qa’ida ideologues like Muhammad al-Maqdisi and AQAP officials have issued a litany of retorts concerning DA’ISH’s big claim that it has established a caliphate. In addition, after DA’ISH called on all jihadist groups to disband, with their members pledging allegiance to the new “caliph,” al-Qa’ida was quick to air old footage of bin Laden pledging bayat (allegiance) to Mullah Omar, whom bin Laden, his successor, and their mouthpieces like al-Maqdisi all refer to using the title Emir al-Mu’minin — a title historically reserved for the caliph. This, to undermine the claim to this title of superior rank over all Muslims made by the terrorist formerly known to his followers as Abu Bakr al-Baghdadi. Now, documents used as evidence in the trial of Abid Naseer could further help al-Qa’ida with its efforts to highlight why jihadis should stick with the original “vanguard” of the Global Jihad movement versus joining its offshoot that alleges to be the true torchbearer of the jihad once led by bin Laden.

Distributed soon after al-Baghdadi’s inaugural address as “Caliph Ibrahim,” the first issue of DA’ISH’s English-language magazine Dabiq contained an article covering the group’s establishment of a caliphate. In it, the group advised that their strategy employed to achieve this monumental feat was a continuation of the strategy developed by the founding emir of al-Qa’ida’s Iraq franchise, Abu Musab al-Zarqawi. Accordingly, al-Zarqawi sought to foment “as much chaos as possible” in order to generate power vacuums in large swathes of territory — ungoverned spaces that he and his fighters could assert control over.

The following are excerpts from the article:

To achieve this maximum chaos, the Shaykh [al-Zarqawi] focused on the most effective weapons in the arsenal of the mujahidin for creating chaos — vehicle bombs, IEDs, and istishhadiyyin. …

… he tried to force every apostate group present in Iraq into an all-out war with Ahlus-Sunnah [literally the Sunnis; in context, those supporting jihadist groups endeavoring to (re)establish a caliphate]. So he targeted the Iraqi apostate forces (army, police, and intelligence), the Rafidah (Shia markets, temples, and militias), and the Kurdish secularists (Barzani and Talabani partisans).

In his speech titled “Hadha Bayanullin-Nasi wa li Yundharu Bih” (This Is a Declaration for the People That They May Be Warned by it) he threatened war on any Sunni tribe, party, or assembly that would support the crusaders.

Thus, by using methods that led to maximum chaos and targeting apostates of all different backgrounds, the mujahidin were able to keep Iraq in constant instability and war, never allowing any apostate group to enjoy a moment of security. …

Shaykh Abu Mus’ab [al-Zarqawi] planned to later execute more complex attacks of a larger scale sometimes referred to as operation of ‘tamkin’ (consolidation), which were meant to pave the way for the claiming of territory. All this led to the gradual collapse of any authority in the areas the crusaders would refer to as ‘the Sunni Triangle.’

The collapse was followed by the mujahidin quickly entering the vacuum left, to announce and establish the Islamic State of Iraq under the leadership of Amirul-Mu’minin Abu’ Umar al-Husayni al-Baghdadi (rahimahullah) — a monumental event in the history of the Ummah.

It was the first state in ‘modern’ times set up exclusively by the mujahidin — the active participants in the jihad — in the heart of the Muslim world just a stone’s throw away from Makkah [Mecca], al-Madinah [Medina], and Bayt al-Maqdis [Holy House of Jerusalem].

In short, these phases consist of immigration [hijrah] to a land with a weak central authority to use as a base where a jama’ah can form, recruit members, and train them. …

DA’ISH: Can we have it both ways?

No-doubt due to their awareness of the broader appeal of the bin Laden brand than the al-Zarqawi brand, DA’ISH has ramped up its claims that it is also the true steward of bin Laden’s agenda. For example, see this article that was published in the seventh issue of Dabiq.

DA’ISH says bin Laden’s successor, who called on their leader to cease the group’s operation in Syria so that Jabhat al-Nusrah could manage al-Qa’ida’s portfolio in the Syrian Jihad, has deviated from the path by which bin Laden sought to advance that agenda.

As is well known, after al-Baghdadi refused to heed Ayman al-Zawahiri’s demands that he halt his activities in Syria, al-Baghdadi’s group was ejected from the al-Qa’ida fold, and soon rebranded itself the Islamic State. But what has received less attention in much reporting on the disagreement that led to al-Baghdadi’s group being ejected from the al-Qa’ida fold is the matter of why al-Zawahiri might have issued those demands. One very likely reason is that al-Zawahiri was concerned al-Baghdadi’s brutal strategy for asserting control over territory would destroy al-Qa’ida’s chances of building popular support for al-Qa’ida among Syrians.

Indeed, in 2005, al-Zawahiri sent a letter to al-Baghdadi’s predecessor Abu Musab al-Zarqawi to convey al-Qa’ida leaders’ concerns that, with respect to the goal of building popular support for the al-Qa’ida brand among Iraqis, al-Zarqawi’s brutal tactics were proving counterproductive. In another letter sent to al-Zarqawi by Atiyatallah around this time, the now deceased al-Qa’ida senior leader referenced the blowback encountered by the GIA pursuant to its use of tactics similar to those employed by al-Zarqawi.

Those tactics highlighted that al-Zarqawi was pursuing a strategy that was fundamentally different from that of the international organization he had subordinated himself, thus his group to.

Put simply, al-Qa’ida was, and remains, far more focused on building popular support for its goal than in coercing local populaces to accede to its will. The latter approach, however, was adopted by al-Zarqawi and, more recently, the terrorist who claims the title of caliph for himself.

UBL’s Answer from the Grave: Nope!

Documents retrieved from bin Laden’s compound in Pakistan that were recently admitted as evidence in the trial of Abid Naseer include a letter in which bin Laden discussed strategy at length. His comments do not square with DA’ISH’s claims. Indeed, in this letter, one finds a most inconvenient truth for DA’ISH’s leadership: Usama bin Laden pointed to the activities of al-Qa’ida’s (now former) Iraq branch as an example of what not to do.

Please alert our brothers in Taliban in Pakistan and Afghanistan to spread among their ranks talk about the sanctity of Muslim blood and to put emphasis on the importance of avoiding killing Muslims. …

I would also like to bring to the attention of our Taliban brothers the extreme importance of kindness and leniency in dealing with the tribes and the villagers and in general (whenever you use kindness in a situation, it improves it; and when you remove kindness from a matter, it only worsens.). As for the tribes that joined or about to join the American Awakenings project, please give them a stern warning that an excessive reaction from their part towards these tribes will only increase the latter’s unity and desire to fight against them. It will be useful to clarify the matter by citing the experience of our brothers in Iraq.

Clearly, bin Laden’s comments concerning the tactics, thus strategy of Abu Musab al-Zarqawi could be used as key resources by counterterrorism practitioners focused on discrediting an array of problematic claims made by DA’ISH to bolster the group’s recruitment activities. Usama bin Laden’s voice is far more credible than even that of the highly-influential al-Qa’ida enabler whom Jordan is using to hurl counter narratives at DA’ISH.

How much more ammunition like this that is found in the massive trove of documents recovered from bin Laden’s Abbottabad compound is going to waste? 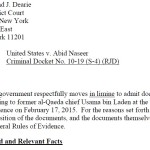 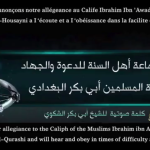