On 2 June 2015, DA’ISH propagandists used Twitter and various popular file-sharing websites to promote a video produced to refute claims that the group’s fighters in West Africa were being repelled by Nigerian and allied military forces. In the video, the group also claims responsibility for downing a military jet. While the individuals featured in the video were likely members of Boko Haram, Boko Haram emir Abu Bakr Shekau, who merged the group with DA’ISH earlier this year, does not make an appearance in this video.

Replete with English-language subtitles, the roughly 10-minute-long video begins with a message delivered by a masked terrorist. Accordingly, despite official reports to the contrary, DA’ISH is repelling military forces deployed to blunt its advances in West Africa:

The main battle was fought on the frontlines, by jets in the sky, and with armored vehicles on the ground. But they chose the media as their main weapon to fight us. But Allah knows the reality on the ground …

Most of our territory is still under our control including Dikwa, Gamborou, Damasak, and other places. The Qur’an schools, markets, and grand masajid are still open. The people are going about on their daily business as usual. But the armies claim, through the media, that they captured our towns and that they assaulted Sambisa and killed us.

I swear by Allah that I am talking right now from Sambisa. Here, in Sambisa, you can travel more than four to five hours under the black flag of Islam by car or motorbike.

We say again to the brothers that we are well. All praise and thanks are due to Allah, the One and Only.

The Qur’an schools, Hadith schools, and courses for technology, weapons, and other fields of knowledge are carried on securely. All praise is due to Allah.

I swear by Allah that no one can demolish this religion. Even if they were to kill all of us, if only one or two survived, they would rebuild the wilayah.

And we are uncountable in the forest of Sambisa! We are thousands of mujahidin here.

Finally, whoever believes that the Nigerian army has defeated us after seeing their false propaganda video, then know that we have battled them again and killed them.

To support his claim that the group is successfully defending its territory, the masked man holds up ID cards that he says were issued to Nigerian military personnel whom he claims were killed by the group. He notes that one of the IDs was issued to a lieutenant named AK Shekoni. 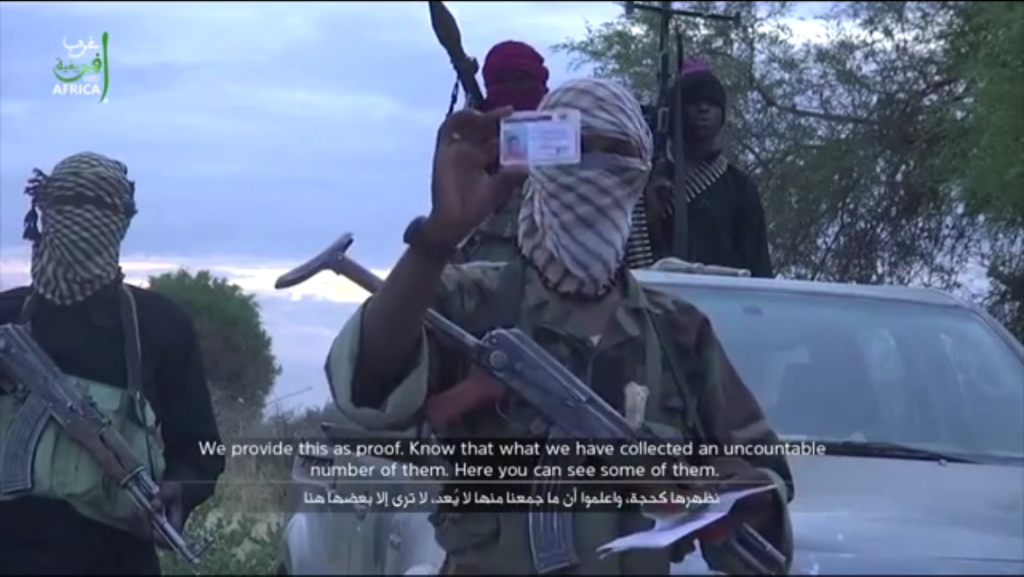 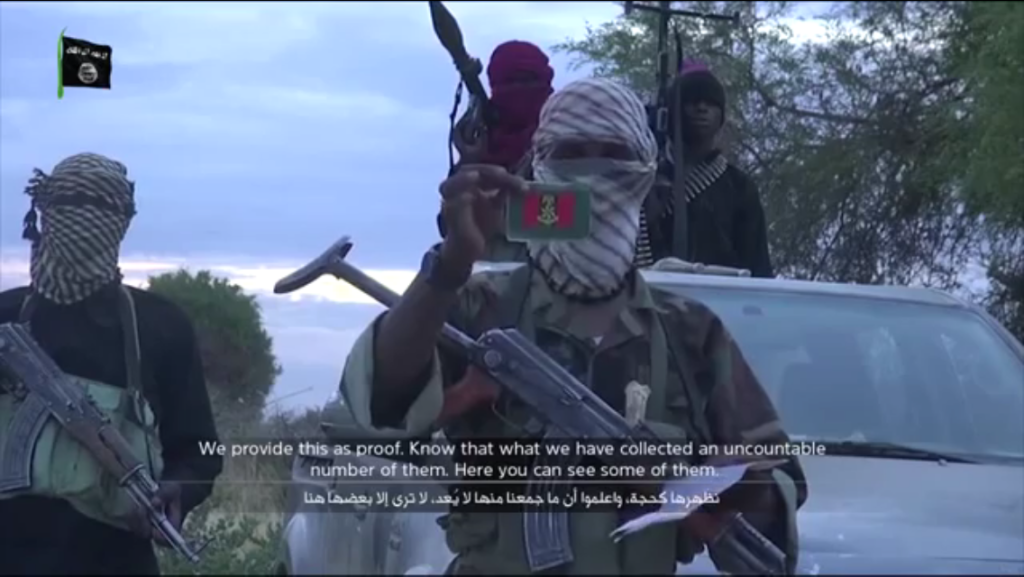 Next, the video features battle footage that is intended to provide further proof that it is defending its territory. The segment ends with scenes of military personnel being executed at gunpoint by terrorists loyal to the Islamic State. 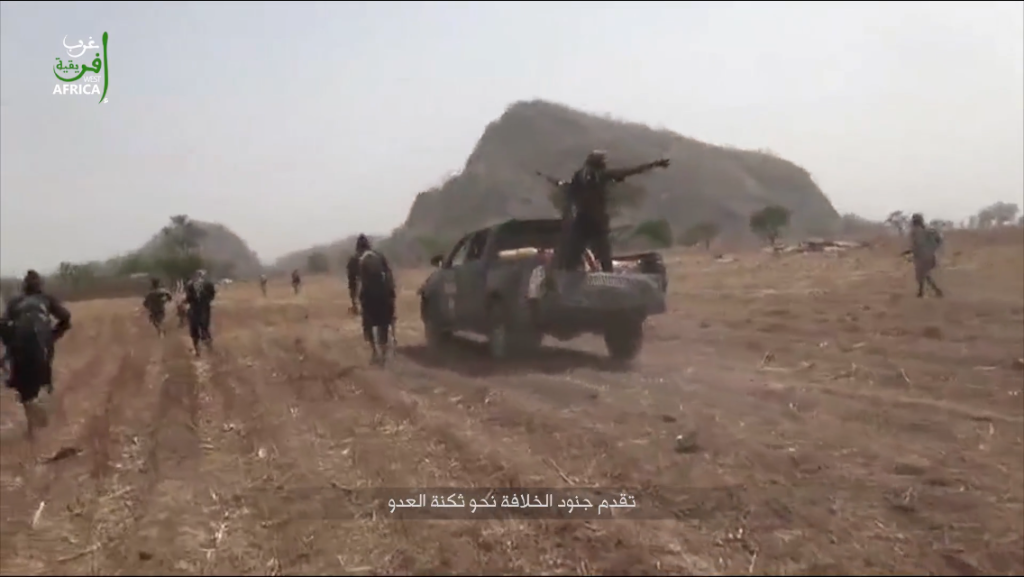 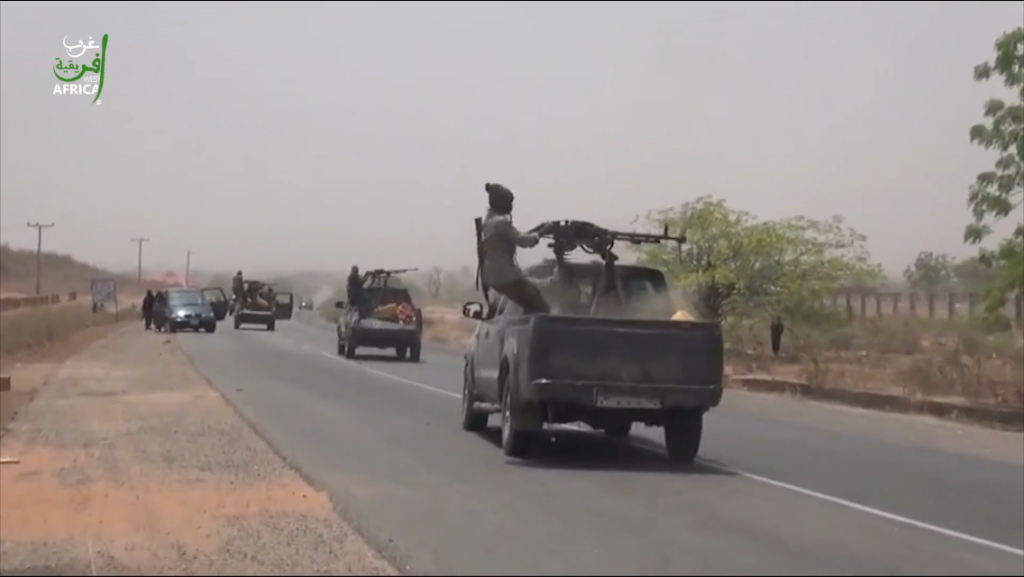 The video’s concluding segment highlights the wreckage of a fighter jet that the group claims to have downed. Commenting on the event, an unidentified terrorist issues the following remarks while surveying the crash site:

… Allah the One and Only downed this Nigerian military jet through our hands this morning. This was not by our power and ability but by the power of Allah.

Here are the pieces of the jet engine and the other parts. Here are its bullets, which were not fired but were exposed to fire and are now burning. Here is the jet propeller. Everyone can see this.

O mujahidin, good news to you all. Good news again.

Victory is from Allah. Here are the remaining pieces of the jet. …

The following are screenshots from the final segment: 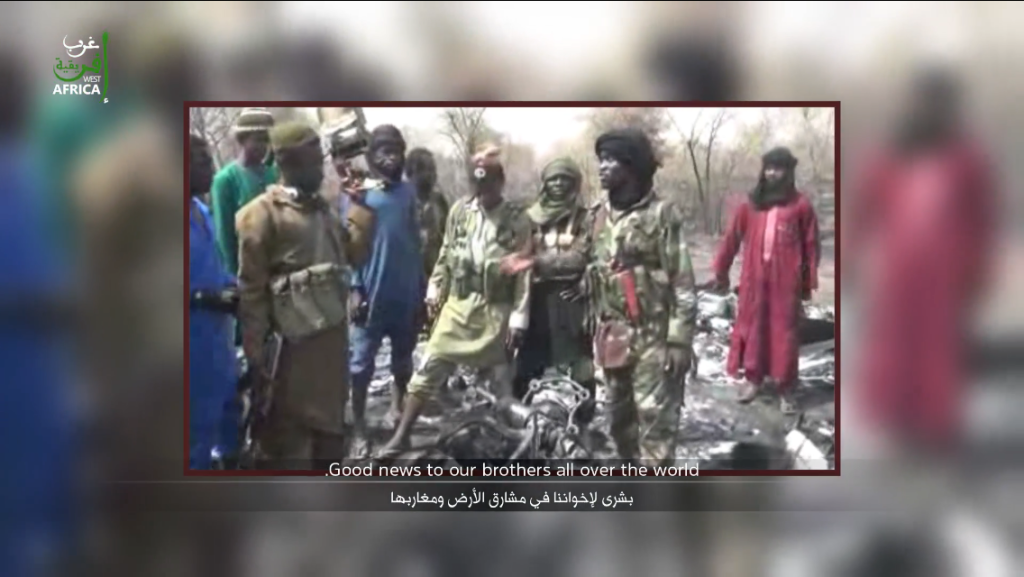 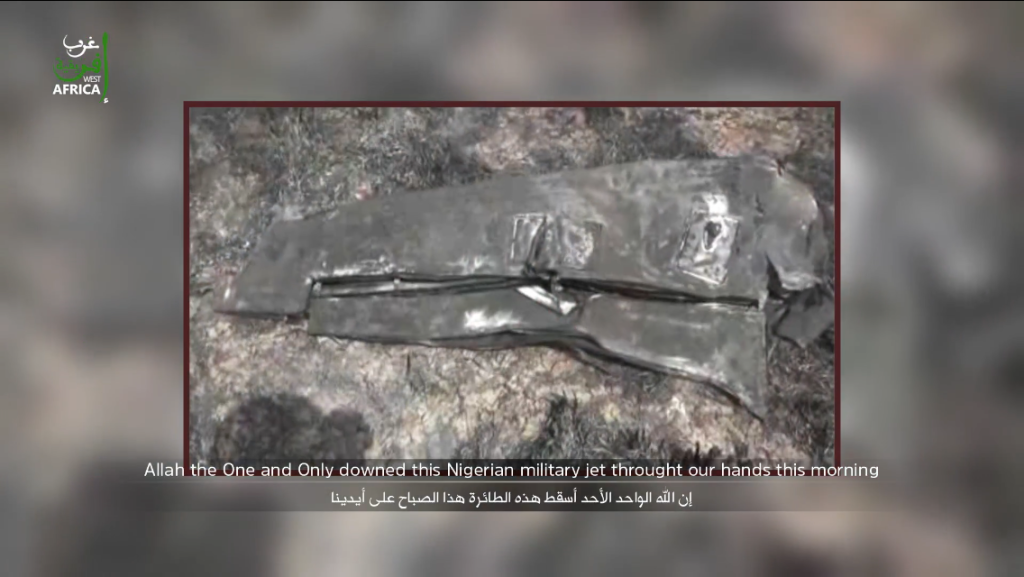 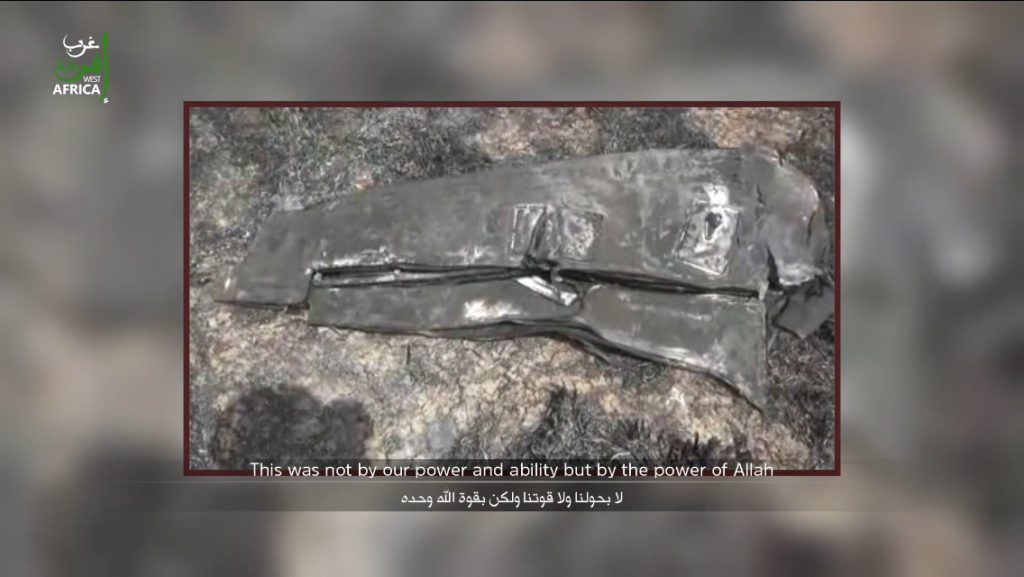 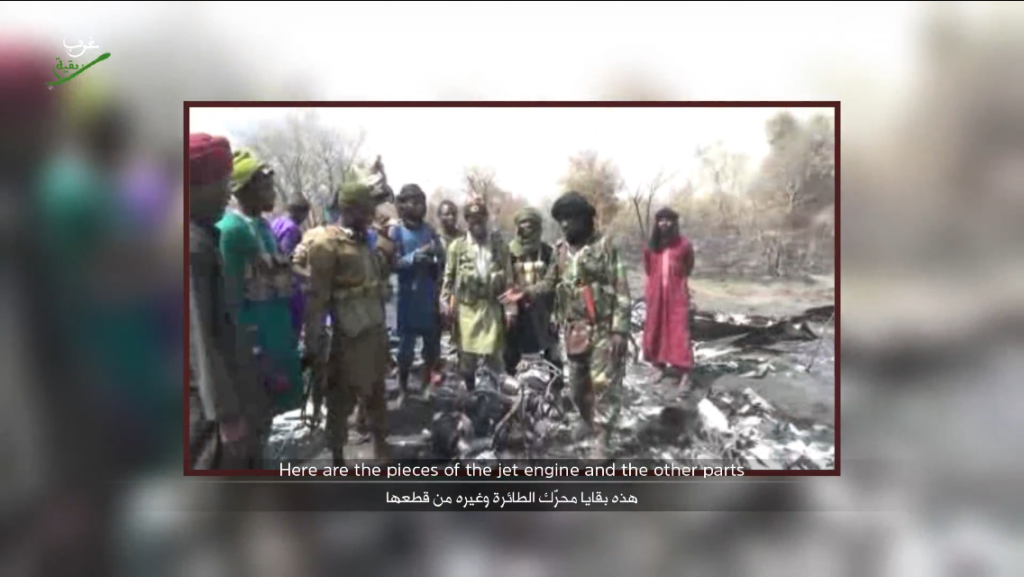 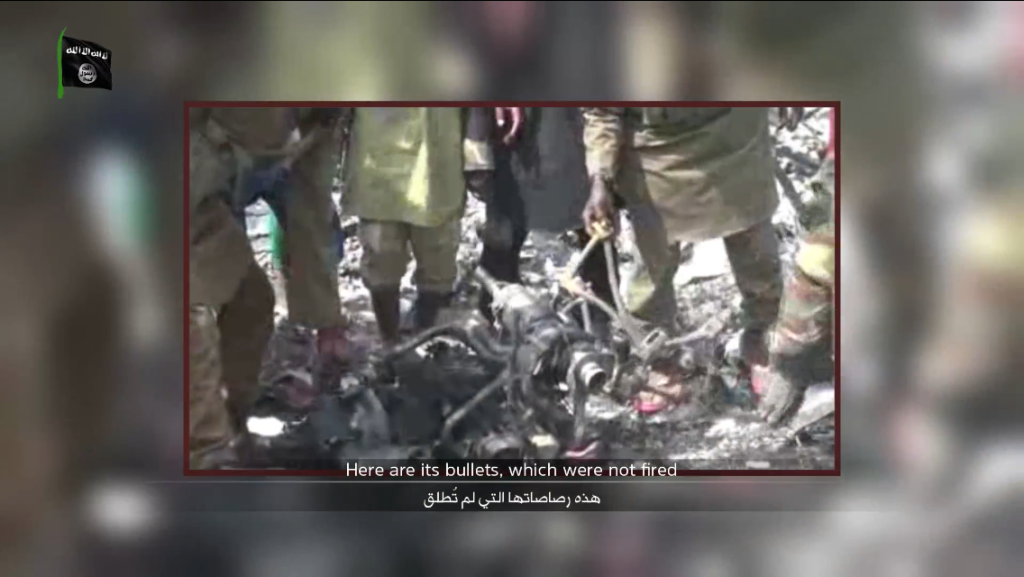 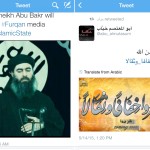 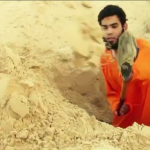 Next article - ISLAMIC STATE IN THE SINAI EXECUTES ALLEGED SPY »