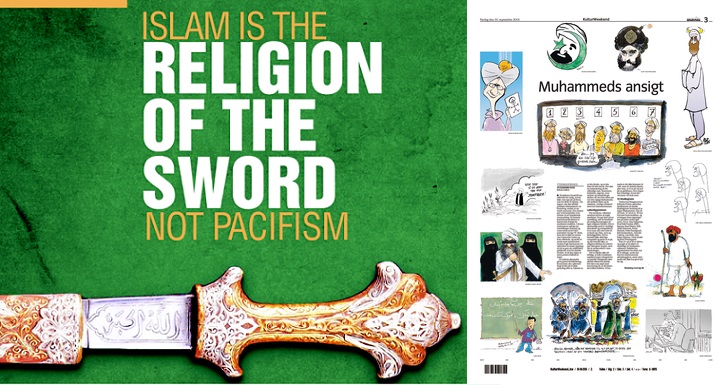 DA’ISH PROPAGANDA PATTERNS — WILL IS LIBYA STRIKE ON 17 FEBRUARY?

From the contents of DA’ISH’s propaganda one may discern a pattern of the group providing advance notice of executions of hostages in the pages of its chief English-language publication, Dabiq. Meanwhile, as there is evidence DA’ISH is delivering preludes for forthcoming terroristic spectacles orchestrated before its global audience, the mass execution video released 15 February 2015 could also fill this function. Particularly as this gruesome video that was said to have been filmed in Libya, and which features a threat against Rome, was posted online two days prior to an important date for Libyan jihadis who share the Islamic State’s ambitions to exact revenge on those who have mocked the founder of Islam.

Two days before it released the video that documented the murders of Coptic Christian hostages held in Libya, IS distributed the seventh issue of its chief English-language publication, Dabiq. The contents of this issue include an article titled “Revenge for the Muslimat Persecuted by the Coptic Crusaders of Egypt.” This article provides a more thorough explanation for the murders of IS Libya’s Coptic Christian hostages than the contents of the video itself. Images used to augment the article are stills from the video showcasing the beheadings of those hostages. 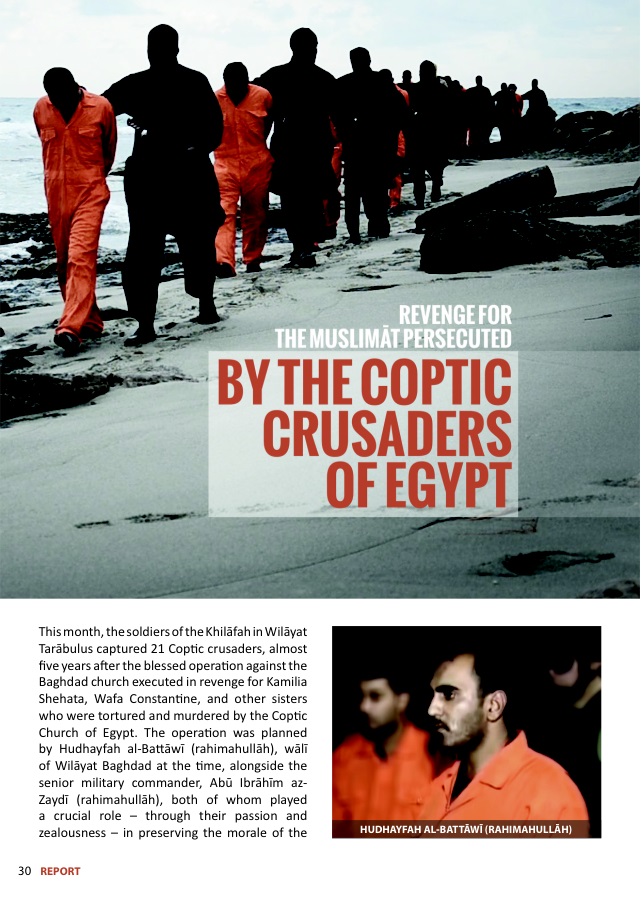 Above: Excerpt of the article in the seventh issue of Dabiq titled “Revenge for the Muslimat Persecuted by the Coptic Crusaders of Egypt”

That a prelude for such an important video as the one released two days later would be offered in the pages of Dabiq was not new.

Released in December 2014, the sixth issue of Dabiq included an interview with captured Jordanian pilot Lt Mu’ath al-Kaseasbeh. The lead photo in the piece appears to have been taken during the production of the video that documented Lt al-Kaseasbeh being burned alive by his captors. As the interview concludes, Lt al-Kaseasbeh was asked, “Do you know what the Islamic State will do with you?” He reportedly answered: “Yes … They will kill me …”

A Prelude for Attacks on 17 February?

On Sunday, 15 February 2015, Islamic State propagandists released the video that showcased the executions of Coptic Christians taken prisoner by IS members in Libya. In addition to indicating these men were murdered in retaliation for what Egyptian Salafists decry as Coptic Christians’ abuses of Camelia Shehata, whom they believe converted to Islam after leaving her husband, a Coptic priest, but was later hidden by the Coptic Church, the video served as a vehicle to help the Islamic State’s Libya-based members accomplish other key objectives: To define the Islamic State as a stronger steward of the Global Jihad movement’s interests than al-Qa’ida, and to deliver a specific threat which Libyan jihadis may interpret as a call to action against Italian interests on 17 February 2015.

The recent attack targeting Western workers in Tripoli that was executed by two young IS members — one using an alias that indicated he was Sudanese, the other using an alias that indicated he was Tunisian — was portrayed as an act of revenge undertaken to honor deceased al-Qa’ida operative Anas al-Libi. Although major news outlets reported al-Libi died of cancer while awaiting his trial in the US, via social media, jihadist propagandists have promoted a theory that al-Libi was assassinated by CIA. Like IS Libya’s recent attack targeting Western workers in Tripoli, the murders comprising the larger act of terrorism showcased in the video released 15 February were portrayed as examples of the group’s efforts to avenge the death of another icon from the Global Jihad movement, Usama bin Laden. Before beheading a large group of prisoners and filming their blood flowing into the Mediterranean Sea, a masked terrorist states, “And the sea you’ve hidden Sheikh Usama bin Laden’s body in, we swore to Allah we will mix it with your blood.”

The group now calling itself the Islamic State was kicked out of the al-Qa’ida fold a year ago. However, as reflected in the contents of the latest issue of Dabiq, as part of the group’s effort to draw support away from al-Qa’ida and to the IS brand, IS leaders portray their jihad as a continuation of the rightly-guided jihad spearheaded by Usama bin Laden. Implicit in the assertion is that the current leader of al-Qa’ida has deviated from the path of jihad charted by bin Laden. 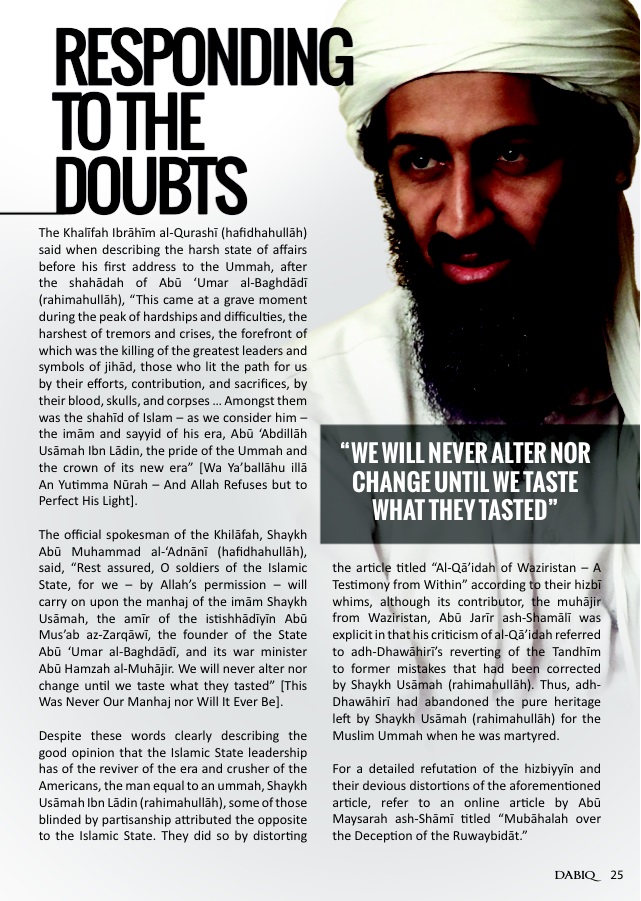 Above: The article concerning the jihad spearheaded by bin Laden in the seventh issue of Dabiq

Equally important, the video released 15 February 2015 also advised, “we will conquer Rome.” That threat could be interpreted as a declaration of war against Christendom. Particularly as an article in the latest edition of Dabiq explicitly portrays Islam as a “religion of the sword,” while depicting Muslims who call Islam a “religion of peace” as ignorant agents of the West.

At the same time, taking into consideration the history of Italian influence in Libya, coupled with the animus Libyan jihadis harbor toward Italians that stems from the Italian occupation of Libya, for Libyan jihadis who are sympathetic to the Islamic State, this threat may dually serve to elicit aspirations to attack not just Catholic and/or Christian interests, but also Italian interests.

Indeed, like the issue of Dabiq that was released days earlier, this video released on 15 February may have also functioned as a prelude of forthcoming operations conducted by IS — either in Italy, or against Italian interests in Libya.

It was released two days after the release of the issue of Dabiq that featured an explanation for the murders documented therein, and two days prior to an important date for Libyan Islamists: A “day of rage” commemorating a large group of Libyans’ response to an Italian politician’s promotion of cartoons depicting the founder of Islam.

17 February was designated a “day of rage” by protestors during the Libyan Revolution. This was the five-year anniversary of the 2006 deadly clashes in Benghazi between Qadhafi’s security forces and Libyans who attacked the consulate of former colonial power Italy in response to an Italian politician’s promotion of cartoons of Islam’s founder published by Danish newspaper Jyllands-Posten (see this report’s lead image). A day later, that politician, Roberto Calderoli, resigned. (The date was also commemorated with the namesake of one of the most influential militias in eastern Libya during the revolution, the February 17 Martyrs’ Brigade.)

Since the al-Qa’ida-linked attack targeting employees of Charlie Hebdo in January 2015, the notion that it is essential for jihadis to defend their faith by attacking those who would mock the founder of Islam has been featured prominently in the Islamic State’s propaganda. Ostensibly, this priority reflects IS’s interest in “out al-Qa’idaing” al-Qa’ida, whose operatives made good on the group’s threats to kill an individual al-Qa’ida held responsible for mocking Mohamed with their January 2015 shooting spree at the offices of Charlie Hebdo.

Taking into consideration IS’s competition for influence on jihadist elements with al-Qa’ida, and given the group’s pattern of issuing what amount to advance warnings of gruesome acts of terrorism such as the incident covered in the video released on 15 February 2015, it should not be ruled out that IS is either planning to conduct an attack in Italy, or against Italians in Libya on 17 February 2015. 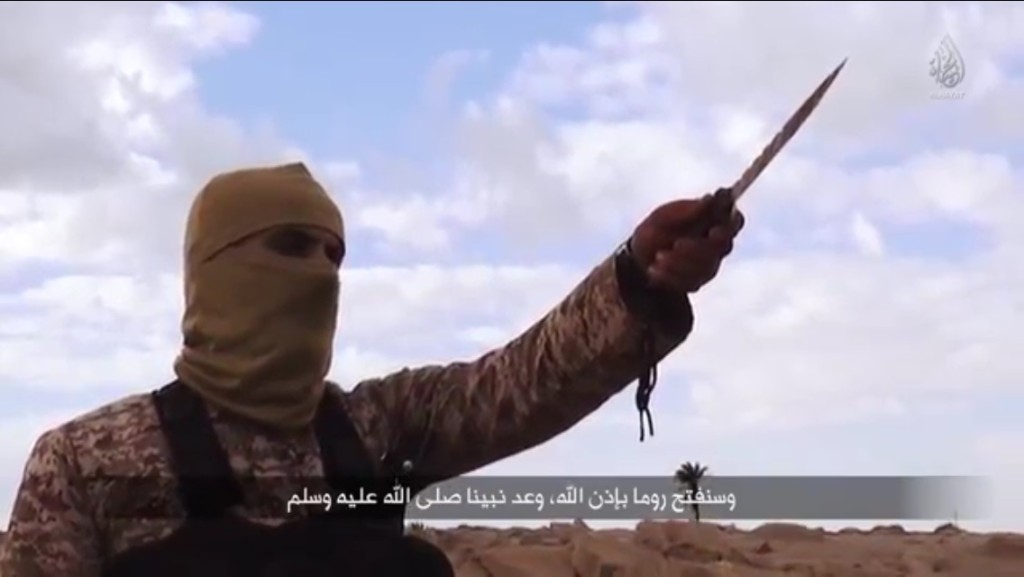 Above: The terrorist who narrated the message delivered in the video released 15 February 2015 points his knife toward Italy from a shoreline near Tripoli, Libya 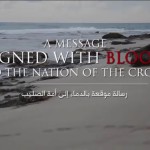 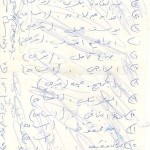