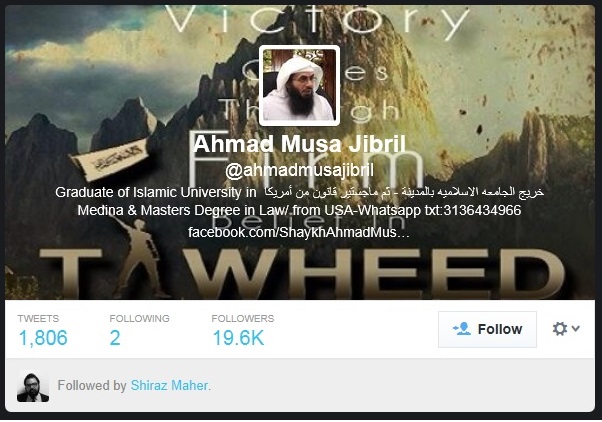 Breaking news this evening reveals Shiraz Maher and other ICSR (Kings College) researchers have published a report that provides substantial coverage of the activities of an individual we have been monitoring in recent months, Ahmad Musa Jibril, whom one of my colleagues and I assess has/had the potential to become the next online English-speaking jihadi cleric celebrity a la Anwar al-Awlaki.

Jibril is a US-based cleric whose sermons made available globally via YouTube came to our attention while monitoring the Twitter accounts of numerous jihadis active in Syria who are assessed to be members of ISIS and Jabhat al-Nusrah. A recent report by Ronald Sandee cited Tweets of one such (deceased) jihadi, a resident of the UK known as Abu Layth al-Khorasani (Twitter account accessible here). Abu Layth is apparently also mentioned in the ICSR report; Jibril praised him via Twitter in February 2014.

In the coming weeks, we will publish some of our findings regarding Jibril’s sermons, Tweets, and his following here at Downrange.

NOTE:  Per the above screenshot of Jibril’s Twitter account snapped in February 2014 we couldn’t help but notice Shiraz Maher was monitoring Jibril’s Tweets, too. 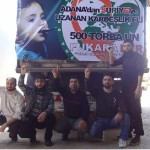